Presently, there is no dedicated firearms training facility which can accommodate the types of weapon training law enforcement personnel require. Currently, agencies within Adams County qualify at a variety of private gun clubs. Some are even in gravel pits. These private or makeshift ranges are not suitable for modern law enforcement firearms training. This training no longer involves just stationary handgun qualifications. Today’s law enforcement personnel, in addition to their handguns, are armed with shotguns and patrol rifles. Their training requires personnel to shoot then move, move then shoot, shoot while moving, shoot/no shoot scenarios, vehicle ambush tactics, target discrimination drills and low-light shooting.
This type of training is, at best, limited. At worst, it is simply impossible to conduct. Private gun ranges are neither constructed nor equipped to accommodate firearms training of this type. Further, law enforcement agencies are hosted as guests at these private ranges. Scheduling training dates and times, understandably, favors the club’s membership. Law enforcement agencies are fit in as schedules permit. Training of this kind also requires properly equipped classrooms which few, if any, of the private clubs can provide.
Sheriff James Muller, who serves as the President of the Adams County Law Enforcement Association (ACLEA), along with Adams County Board of Commissioners Chairman, Randy Phiel, came up with the idea of a public/private partnership to build a dedicated law enforcement range at no cost to county tax payers. The Board of Commissioners agreed to lease land, adjacent to the Emergency Services Center in Straban Township, to the ACLEA (a Pennsylvania Non-Profit Organization). Along with the land, the county granted access and use of the classrooms located in the Emergency Services Building. The ACLEA, in turn, assumed the task of designing, building, managing and operating a law enforcement range to proper standards. Policies and procedures have been written for use of the range with various legal requirements being addressed.
From when it was first envisioned over fifteen years ago, the creation of a purpose-built law enforcement firearms range is long overdue. With the Signing of the Lease on October 28, 2015 and the Ceremonial Ground Breaking event on Friday, October 30 , 2015, a major milestone in the development of this project was reached. The project now moves on to the capital fundraising stage.
Donations, both monetary and through in-kind services, will be solicited from service clubs, social organizations, businesses & corporations as well as from individuals interested in assisting at various contribution levels. Names of major donors will be permanently displayed at the ACLEA range’s Memorial Flag Plaza.
Several major contributions were received at the October 30 , 2015 groundbreaking ceremony. They included: donations from the June 20, 2015 Firearms Range Fund Raising Event held at Battlefield Harley-Davidson, from the Gettysburg Eagles Aerie 1562 and from 33rd District Senator Richard Alloway II.
Capital Campaign Co-Chairmen are Sheriff Jim Muller and Chairman Commissioner Randy Phiel. Senator Rich Alloway is the Honorary Chairman.
With the support of Adams County donors, it is envisioned that the project will be completed and an opening date tentatively scheduled in Mid-2016. 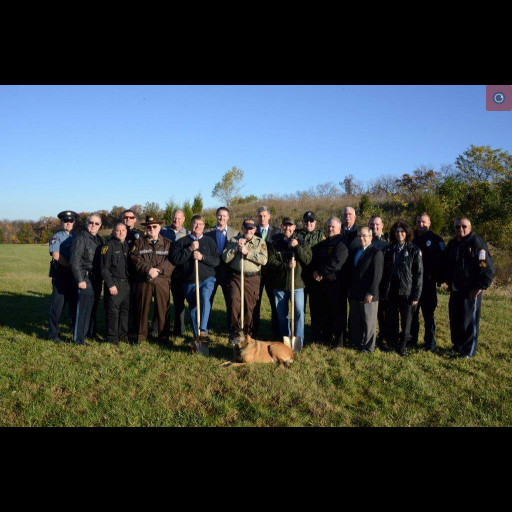