August 2013: First published by Mark Walters for The Evening Sun

At 4:02 Friday afternoon, an alert came over the Adams County Courthouse radio. An active shooter was in the building.

Thankfully for county commissioner Randy Phiel, it was only a test.

Within minutes of the alert, there was a man banging on the locked door to Phiel's office, screaming "I got something for ya Randy!"

Blank shots were fired in the corridor to the commissioners' chambers as Phiel stayed hunkered down in his second-floor office with Adams County Sheriff James Muller. Phiel joked about the shooter, a volunteer participant, knowing his name. But Phiel, who was a United States law enforcement ranger with the National Park Service for 30 years, said realistic simulation is what active shooter training is all about.

Muller explained that in a live shooter situation, responders have three options: Run, hide or fight.

Fight was the goal of the County Sheriff's Office and Courthouse Security Department Friday as a team of four navigated the first two floors of the courthouse in an attempt to neutralize the shooter.

"An active shooter team has whatever resources we have at the time," said Cameron White, sheriff's deputy. "Every day officers should be prepared to counter something like that and be able to react to the situation at the time."

Len Supenski, Muller's chief deputy, said chasing an active shooter requires constant alertness with responders moving toward the shooter. "You don't control the perimeter like a SWAT team," Supenski said. "The shooter is usually moving rapidly. The team must move deliberately but not too fast. To avoid running into something."

The simulated exercise was a joint effort between the Adams County Sheriff's Office and Courthouse Security Departments to better coordinate the county's emergency tactical planning, according to Supenski. Supenski explained that over the last year, county officials have worked extensively to facilitate better communication between the two departments who are jointly responsible for protecting the courthouse, its staff and any other occupants. 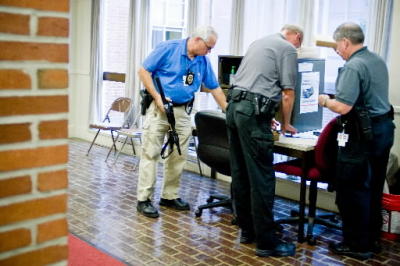 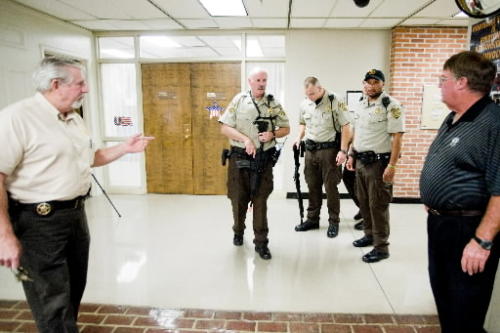 Phiel noted the approximately 200 hours of planning that went into Friday's drill that only took about 30 minutes. He said when he took office in 2012 along with commissioners Jim Martin and Marty Qually, the board realized immediately that the level of cooperative planning, training and coordination between courthouse security and the sheriff's office could be more effective.The commissioners worked with judges and the district attorney's office in proactive planning to better train those responsible for protecting the public.

Supenski said Friday's exercise will hopefully be the first of many to follow as the sheriff's office and security department continue to work collaboratively in establishing a unified emergency response system.

"Just like with anything, practice always helps make you stronger to defeat whatever comes your way," Baltzley said.

There were two minor abrasions suffered by participants, but Baltzley said that is all part of the training.

Several scripted role players joined a handful of local law enforcement agencies that helped create the simulation to make it as realistic as possible.

"No one knew what was going to happen," Muller said. "We didn't tell people anything of what's going to happen. Training like this sticks with you, but you can't do it halfway. It has to be done the whole way."