By STEPHANIE WEAVER -  The Evening Sun

A group of six people stood on the shooting range on a cold, windy Sunday afternoon, ready to shoot their targets - a drawn black outline of a human upper body filled with different colored shapes and a large, red oval in the center.

But there was a twist. Moments before shooters were given the signal to fire, one of the instructors would announce a shape to aim for and hit.

And when the signal sounded, the group steadied their aim and shot. After shooting five rounds, shooters walked over to the targets with their instructors.

The purpose of the exercise was to help shooters make a split-second decision when shooting. It was one of many training drills during the concealed weapons course held over the weekend, hosted by volunteers from the Adams County Sheriff's Office.

Although safety courses for gun owners are not required in Pennsylvania, the state does require a concealed weapons permit. Residents who wish to openly carry their weapons do not need a permit.

The two eight-hour classes over the weekend focused on use and safety gun ownership, as well as the ethical and legal aspects of using a handgun to protect themselves. Nearly 30 students brought in their guns on Saturday and Sunday, splitting class time between the classroom and the shooting range at Green Springs Rod and Gun Club in Hanover.

"These people care enough to want to know about the gun, and that's a real good thing," Adams County Sheriff James Muller said.

Buying a weapon is a lifestyle change - a conscious decision to protect someone's life, he said. But there're other aspects - ethical and legal, as well as mental and emotional - that comes along with ownership, he added. 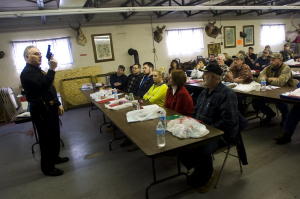 Chief Deputy Len Supenski of the Adams County Sheriff’s Department explains firearm handling and safety to a class on Saturday afternoon at the Green Springs Rod and Gun Club during the department's two-day class for holders of a concealed carry permit. (THE EVENING SUN -- SHANE DUNLAP)

The course started about four years ago, and interest is growing, drawing people from all different backgrounds, Adams County Chief Deputy Len Supenski said. Many new gun owners sign up to take the course that is offered a few times a year.

With the increased interest, instructors are considering offering the course every month. The course also draws lifetime gun owners who want to refresh their skills. At the end of the course, participants receive a certificate of completion.

Wayne Noel, of Hanover, has been around guns his whole life, learning to shoot when he was 12. He's owned his own handgun for 42 years. Although he knows how to operate his handgun, he chose to take the course to learn more about the ethical and legal issues should he ever have to use it on someone.

The legal part of using a concealed weapon can be difficult to understand unless you're directly involved in the law of it, he said. But if the trigger is pulled, it's better to know what your legal rights are, he added.

And you don't know what you're getting into anymore - even at Wal-Mart, said President of the Green Springs Rod and Gun Club Joe Hastings. If a person should need to use a weapon on another person for safety purposes, it should be used with sound judgment, he said.

Hastings signed up for the April course to learn the updated information to be sure of his legal rights.

Ellen Boyce, of Hanover, had never shot a pistol before Saturday. She decided to take the class to learn about the safety of guns in case she ever had to use one. She encouraged others to take the course, adding it was a "wealth of information."

Although safety courses are not required for Pennsylvania residents who obtain a concealed weapon permit, Boyce believes all gun owners should educate themselves.

Supenski agreed. Many people buy a handgun and put it in a drawer, thinking it will protect them like some sort of talisman, he said.

"It won't ward off evil spirits," he added, “not without training.”

An individual who is 21 years of age or older may apply for a license to carry firearms by submitting a completed Application for a Pennsylvania License to Carry Firearms to the sheriff of the county in which they reside or if a resident of a city of the first class, with the chief of police of that city along with the required fee.

Individuals who are 21 years of age or older and are NOT Pennsylvania residents may apply for a license by submitting a completed Application for a Pennsylvania License to Carry Firearms to any Pennsylvania County Sheriff's office along with the required fee. A Pennsylvania license cannot be issued to a resident of another state who does not possess a current license or permit or similar document to carry a firearm issued by their home state if a license is provided for by the laws of that state, as published annually in the Federal Register by the Bureau of Alcohol, Tobacco and Firearms of the Department of the Treasury.

The sheriff has 45 days to conduct an investigation to determine an individual's eligibility to be issued a license. Included in the investigation is a background check conducted on the individual through the Pennsylvania Instant Check System (PICS) to determine if the records indicate the individual is prohibited by law. In accordance with 18 PA C.S. §6109, a sheriff may deny an individual the right to a License to Carry Firearms if there is reason to believe that the character and reputation of the individual are such that they would be likely to act in a manner dangerous to public safety.

Details: Contact Chief Deputy L. J. Supenski, Adams County Sheriff's Office at 717-337-9828 Ext. 408 for more information about the course and the dates and times of other scheduled classes.

Don O’Brien, of Littlestown, fires a weapon with guidance from Deputy Wildlife Conservation officer Hal Heagy during a drill where the shooter is required to move while firing at targets during Sunday afternoon at Green Springs Rod and Gun Club. The practice was part of the concealed carry class that is taught by members of the Adams County Sheriff’s Department. (THE EVENING SUN -- SHANE DUNLAP) 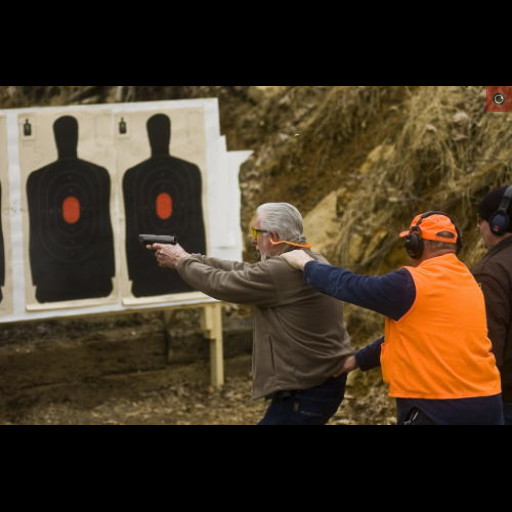